I thought this was cool this week when at a local university in Downtown, Washington DC, they did a reenactment of the fall of the Berlin Wall.

The division between East and West came tumbling down on November 9, 1989 ushering in the end of the Cold War.

The students graffitied the wall with things they disliked like fascism, socialism, high taxes, a PC culture, censorship, and poverty.

By the afternoon, they knocked down the wall in the playful reenactment.

I found it hopeful to think that we can do the same in real life.

With President-elect Trump, perhaps there is the opportunity for new and better relations with Russia.

Rather than escalating tensions and pointing new more advanced nukes at each other and encroaching ever closer toward confrontation, we can stop the madness.

Truly reset the mindset of conflict and instead work together and walk it back.

With respect for each other, there is enough world pie for everyone.

Tear down the wall, and build trust, respect, and peaceful relations again.

No nonsense peace through strength and cooperation is the sane way forward–the alternative would be disaster! 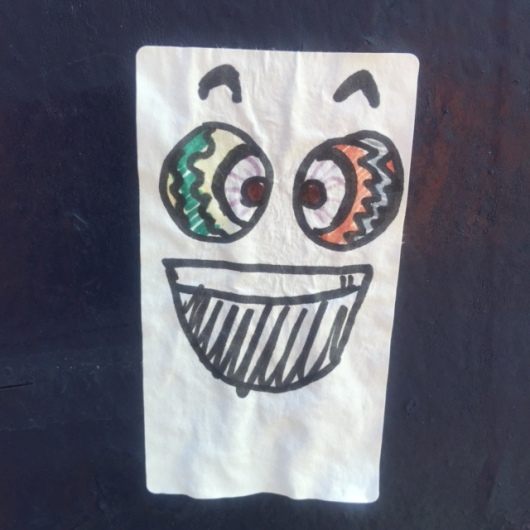 I took this photo from a sticker plastered on the street corner in Washington, D.C.

What I like about it, aside from it’s cute, is that I see a message here about good communications and conflict management skills.

Notice the eyes are different (one is green/yellow and the other is orange/blue)…like it’s two people.

But there is one mouth open, speaking between them.

This speaks to that while we may be talking to each other and even think we are saying the same thing (“violently in agreement”), we need to make sure that we are listening, understanding, and working through our differences–so at the end, we are both really “seeing eye to eye.”

While each of us is different, and we may never fully agree (and cabn “agree to disagree”), we can also negotiate and come to terms on a win-win course of action.

Talk it out, bridge the gaps, and get to a place where we not only are able to see eye to eye, but can then go forward together and make it truly work. 😉

This was a humorous engraved stone that I found in a gift shop today.

It is a Concord “Words From The Wise,” engraved paperweight, crafted in England.

Diplomacy is generally associated with negotiation, persuasion, consideration, tactfulness, etiquette, and respect. However, this engraved paperweight has a little bit of a different view of it–“The art of letting someone have it your way.”

Diplomacy has traditionally been differentiated from the use of military power in that diplomacy relies on “soft power” (co-opting or winning over cooperation), whereas the military employs “hard power” (coercion). Both are ways of handling relations and resolving conflict.

More recently, some foreign affairs experts have started to use “smart power,” which is situational-based–leveraging alliances and partnerships in some cases and a strong military in others.

In any case, it’s all about working together to bridge differences–and like the “Easy Button” the best way is to maintain a strong relationship, whether you get your way or not. 😉