Even Sophie the dog wears a mask against Coronavirus.

Virus appears to be “reactivated” after person is already cleared of it.

Is this the result of faulty testing or is this not your typical virus???

Folks, it does not look like we are in clear by a long shot on this yet.

Be careful and stay safe!  😉

(Credit Photo: Andy Blumenthal and thank you to my sister with a PhD in biomedical science for sharing this with me) 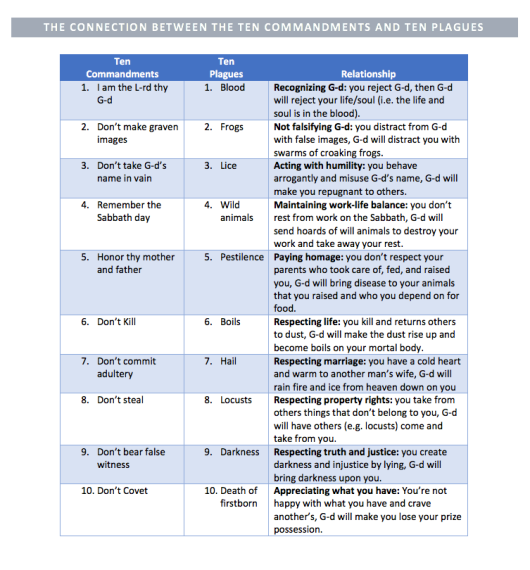 It occurred to me while listening to the Rabbi’s speech at Magen David Synagogue today that there is nothing random in the Torah (Bible).

Since this weeks’s Torah reading in Exodus was about the ten plagues in Egypt, I realized that this must be connected to the later ten commandments in a subsequent reading.

This table explains how the commandments to the Jews (and all mankind) and the plagues on the Egyptians are connected one for one. 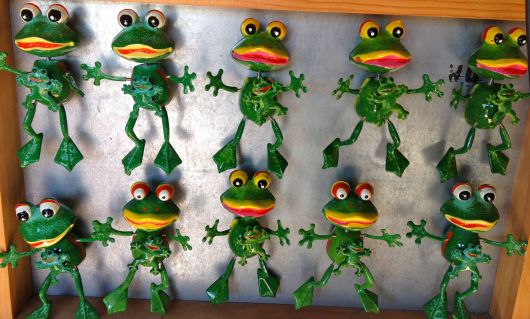 According to Save The Frogs, some interesting facts:

– There are over 6,300 species of frogs and toads (a close, warty relative of the frog).

– They range from just 9 mm to over 30 mm and 6.6 lbs, and can live from a few years to as many as 30-years (ol’ frog river uncaring with the flow of the Mississippi).

– Frogs are amphibians developing in their larval state in water as herbivores, but as adults living on land as carnivores (flies anyone).

– Toads tend to have poisonous secretions as does the Poison Dart Frog (maybe the princess should not be kissing that frog).

– Australian Stony Creek Frogs build nests for their eggs just like birds (got to protect those youngins).

– Similarly, Burrowing Frogs survive hot, dry climates by slowing their metabolism and shedding their skin into a protective mosture-retaining cocoon, and others can live underground for as many as 10 months and surface in mass when the rains come (like the 2nd plague in Egypt).

– Pesticides, fertilizers, and parasites have been increasing deformities in frogs such as missing limbs or having 6 legs (making jumping on 3 legs a bitch and jumping on 6 an unfair advantage).

Frogs are a great illustration of how to “adopt or die” with the emphasis on living and thriving forward–not so sure though about frog-flavored ice cream. 😉

Should we worry about something that hasn’t happened to us yet?

Wired Magazine (Sept. 2012) has an interesting article called Apocalypse Not.

Its thesis is that “people freak out over end-of-the world scenarios” and they should know better because despite all the fear and predictions of catastrophe, nothing ever really happens.
It categorizes the doomsday cataclysms into 4 types:
1) Chemicals–these come form things like pesticides (like DDT), smoking, and CFCs, and result in air pollution, acid rain, ozone depletion, and climate change.
2) Disease–recent fears of pandemics were associated with bird flu, swine flu, SARS, AIDS, ebola, and mad cow disease.
3) People–we can cause our own hell through population explosion and famine and although it didn’t mention this, I would assume the brutality and wars that can wipe entire races out.
4) Resources–Peak oil theory, metals and minerals, and other resource constraints have been causes of consternation leading us to look for alternative energy sources and even recently consider mining minerals on asteroids.
The article goes so far as to poke fun at those who are concerned about these things even stating that “The one thing we’ll never run out of is imbeciles.”
Wired does acknowledge that while “over the past half-century, none of our threatened eco-pocalypses have played out as predicted. Some came partly true; some were averted by action; [and still] some were wholly chimerical.”
What the author, Matt Ridley, has missed here in his logic are a few main things:
– Smaller things add to big things–While each individual issue may not have reached the catastrophic tipping point been yet, these issues can certainly progress and even more so, in the aggregate, pose dangerous situations that we may be unable to contain. So you can choose to live with blinders on for today, but the consequences of our choices are inescapable and may only be around the next bend.
–Recognizing the future–just because things like death and final judgement haven’t happened to us yet, doesn’t mean that they aren’t in store for us in the future. This sort of reminds me of this Jewish joke that no one leaves this world alive.
– Destructive powers are multiplying–many destructive forces were traditionally local events, but are now becoming existential threats to whole civilizations. For example, how many people globally can we kill with weaponized pathogens and how many times over now are we able to destroy the world with our thermonuclear stockpile.
– Learn from the past–Apocalypses and terrible events have already befallen humankind, whether the bubonic plague in the middle ages, the destruction of the ice age, the flood in biblical times, and even more recently the Holocaust and the World Wars in the 20th century.
Unfortunately, there is no shortage of bad things that can happen to people–individuals or many people–and if we are not conscious of the things we are doing, their potential impacts, and generally act smart and ethical, then bad things can and will most-definitely happen.
Wired ends by saying that things like policy, technology, and innovation can solve the day. However, while these can surely help and we must always try our best to have a positive impact, some things are also out of our control–they are in G-d hands.
Finally, while not every event is an existential threat, some surely can be–and whether it’s the impact of an asteroid, the death toll from the next horrible plague, natural disaster, cyberwar, or weapon of mass destruction, or even possibly when aliens finally come knocking at your door, it would be awfully stupid to think that bad things can’t happen.
(Source Photo: here with attribution to tanakawho)