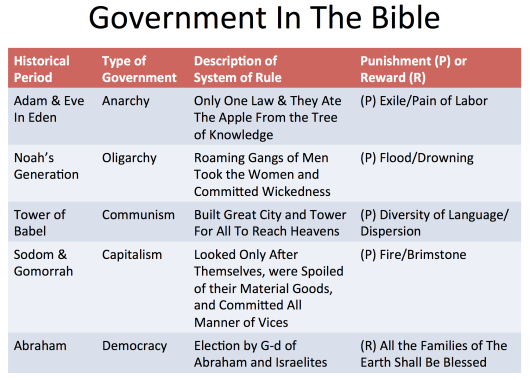 Thought this was a really interesting speech by the Rabbi Haim Ovadia in synagogue today.

The origin of government and the function/dysfunction of society and rule of law is rooted in the in beginnings of mankind as told in the Bible/Torah.

Starting with Adam and Even in the Garden of Eden — This was pretty much anarchy with only one law at the time not to eat the apple from the forbidden Tree of Knowledge.

Then in Noah’s Generation – There was oligarchy with roaming gangs that took the women and committed wickedness.

Followed by the Tower of Babel — This was communism with everyone united to build and have a common property, a great city and tower reaching to the heavens.

Subsequently Sodom & Gomorrah – This was capitalism with people looking after their own selves and cities, getting spoiled of their material goods, and committing all manner of vices.

And only then in the time of Abraham – There arose democracy with G-d electing Abraham and the Israelites based on lovingkindness and charity.

As we know from the Bible and can see in the chart above, only democracy resulted in blessings for all of mankind.

Yes, the election in the bible was made by G-d, but the notion is one based on “elected” representatives that do good and are a light for the whole world–so no, dictators need not apply!

The Bible is truly a blueprint for us as to how we can live our lives as well as how we can govern the world effectively . 😉