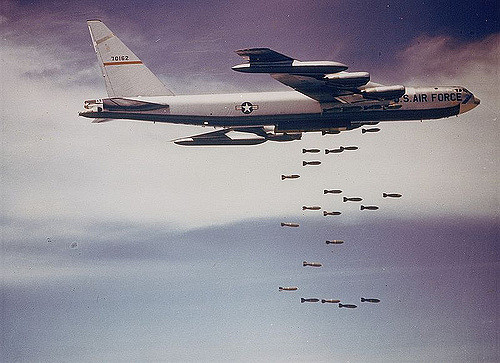 So the good news is that we have killed about 45,000 ISIS terrorist fighters.

The bad news is two-fold:

So we are averaging less than 1 kill per bomb!

Sure, we are also hitting other targets like oil and gas infrastructure and tankers.

But about 20,000 of the munitions dropped are GPS precision-guided (e..g Joint Direct Attack Munitions, Small Diameter Bombs, and Hellfire Missiles) and have cost $2 billion!

That comes out to a cost of around $45,000 just for just 40% the bombs to kill each and every ISIS terrorist, and doesn’t even include all the extensive military infrastructure, planes, intelligence, and people.

And this is just a super tiny drop in the bucket compared to the $4-$6 trillion that the wars in Iraq and Afghanistan, after 9/11, has cost just through 2013.

–That represents between 20-30% of our our entire $20 trillion national debt!

At this rate, ISIS, Al Qaeda, and the other terrorists may simply be able to cause irreparable damage and even bankrupt America.

How long can we afford to fight these extended and expensive wars against terrorism and never seem to even win–what’s the strategy here? Is there one?