So some people have this notion about management that is all wrong.

– Management is not a right or entitlement.

– Management is a wonderful privilege!

The privilege comes with responsibility and is earned by knowing how to manage and treat your people right.

– Showing you value them

– Helping to develop them

– And of course, achieving results together!

“If you don’t treat people well

you won’t be a manager for long.”

Again, it’s a privilege, not a right, to manage and lead others.

Those who abuse their privilege and people–it’s like the cycle of life. 😉

People vote to get representation in political office for what they believe or want.

But now, cities like Los Angeles that are looking to boost voter turnout want to offer cash prizes.

Nice (not!)–head to the polls like you do to buy a Powerball ticket.

Votes, like love, is not something that should be bought.

For those fortunate enough to live in a free country, voting is a special right where everyone can have a say and influence the world around them.

Instead of focusing on handing out rides or money to go and vote, maybe instead we should create awareness of what a great opportunity it is to live in a  democracy and be able to chart our own course rather than live like so many around the globe under the rule of dictators and tyrants.

Voting is a great privilege for those who care to stand up and make a difference by going to the polls, voting is not an ATM machine. 😉 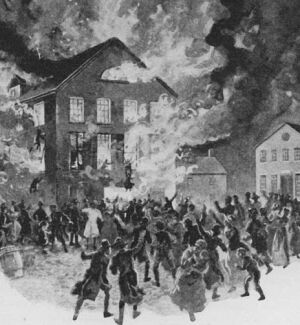 Freedom of speech is one of our most precious rights.

However, there are limits – times when the right to speak and publish comes up against the principle that one should not cause harm to others.
The famous example is that you cannot falsely cry, “Fire!” in a crowded theater.
Free speech–yes; harm to others–no.
This week (11-17, July 2011), a BusinessWeek article called “Set Them Free”  exemplifies what can happen when free speech goes too far.
The article is an argument in favor of illegal immigration.
The author’s thesis is stated in the form of a rhetorical question: “Laws against illegal immigration make little economic or moral sense. So why punish the brave citizen who break them?”
Certainly, I am sympathetic to newcomers to our land. I come from a family of immigrants, like so many American citizens, and I value the opportunities and freedom this country has provided to me and my family.
However, in this article, the author openly promotes breaking the law. He supports “illegal” immigration and calls for others to facilitate it.
One can argue about economics and morality of immigration policy, but from my perspective, obviously, no country can have fully open borders. Logically, this helps to ensure safety, security, and social order. Coming up on the 10-year “anniversary” of the events of 9/11, this is a no-brainer.
I therefore have trouble believing that Bloomberg would publish an article essentially calling for an end to border security. Any arguments regarding economic benefit do not detract from the clear negative implications for national security. (Note: all opinions my own.)
Not only does the article ignore this point, but it brazenly calls the laws against illegal immigration “immoral.”
The author stretches the limits of free speech beyond the breaking point in my view when he recklessly states: “When a law itself prohibits doing the right thing, when it is immoral rather than just annoying or inconvenient, and when breaking the law does no great harm to any others, it is justifiable for people of conscience to chose to break that law.”
He literally states that illegal immigration is “the right thing (!)”
How can a mainstream media source publish such extremist rhetoric, even going so far as to compare the U.S. laws to apartheid: “Current, U.S. immigration laws have all the moral standing of pass laws in apartheid South Africa.”
In addition to teaching us that free speech can be misused to spread extremism, hatred, lies, promote civil disobedience, and enable chaos, there are some other unfortunate lessons here.
The first is that one must think critically about what one reads, even if it is in a supposedly “mass media” publication. For immigration is a blessing and a privilege, but not an entitlement. Nobody has the right to enter another country’s borders at will, without restriction.
Second, and more troubling, extremist thinking clearly continues to flourish not only outside our borders, but from fanatics within.
While I agree that we should always be moral, help those in need, and make good economic decisions, this does not negate the importance of maintaining security and social order. Further, it is irresponsible at the very least to promote breaking the law, and offensive to compare illegal immigration as an issue of economic exploitation to the drastic human rights abuses of apartheid South Africa.
(Source Photo: here)

This week I was riding home on the metro one day and I witnessed this strange course of events.

Typically, on the DC metro, there is not a lot of panhandling when compared with a city like NY—in fact, it is practically a rarity on the Washington, DC Metro.

So you can sort of image my surprise, when I entered the metro this week and immediately hear a young man begging for money (i.e. “a beggar”) coming down one end of the train car.

What made this particular panhandling scene really stand out though was that the beggar, who appeared young and able bodied, had a serious speech impairment. He kept trying to say something to the effect that he was homeless and needed $16 for a bed to sleep in that night. But he was mumbling, stuttering, and barely able to get the words out, but clearly he needed help and people on the train were giving him money, especially one young family, where the father put some bills into his daughter’s hand who reached out to the beggar, who gratefully grabbed the money and continued trying to repeat the words that seemed stuck in his mouth.

Then, things turned stranger, because there was another young man in a wheelchair with his back to me—so that I could not see what was wrong with him. And all of a sudden this disabled person starts yelling at the beggar to “speak up, get it out, and tell me what’s wrong” – again and again in this horrendous mocking way to the beggar who could barely speak.

The beggar kept trying to get the words out that he was homeless and needed $16 for a bed for the night—but he struggled again and again—mumbling and falling all over himself trying ask for help. And no matter how hard he tried; the disabled man in the wheelchair kept taunting him—as if holding out a bone in front of a dog, but never letting him get any. If the beggar couldn’t speak clearly and ask for the money, the disabled man wasn’t going to give him any and on top of it was going to shame him even more than he already was in front of the crowded train car.

It was devastating to watch; yet everyone did. Somehow, no one could say anything to the disabled man about his behavior—because he was disabled.

After the beggar made it past the wheelchair, staring at the man who mocked him, and made it down to the other end of the car, the beggar turned around one last time, looked at the disabled man in disbelief—like how of all people could you do this to me—and left the train.

At that point, the man in the wheelchair turned his chair and I saw he had only one leg. And he was angry. Obviously angry at the world for his loss and pain and determined to let loose on whomever crossed his path, even a speech-impaired beggar.

I thought about this human tragedy during and long after, and am still obviously thinking about it.

I suppose I expect to find situations where the strong prey on the weak—that’s like Darwin’s theory of the “survival of the fittest”, but I was taken aback by seeing one person down on their luck “getting it” from someone else who was also in pain and suffering. Somehow, I guess I just thought—maybe naively—that someone who knew “how it felt” would have more mercy on someone else in similar shoes.

I come away with a life lesson about leadership and management that for those fortunate enough to achieve these positions, you should never take them for granted. They are not an entitlement because of hard work, education, or other achievements; rather these positions are a privilege, and this teaches me that you should never look down on others or rise up on the backs of others. Each person, each life in this world is valuable. And every person deserves respect and should give respect—whether they are begging and speech-impaired or disabled and missing a leg. We all need to have mercy on one another. The world can be a harsh place indeed.