We went to the art galleries in Rockville Town Center today.

They had this video called “Neighbor” by Kanat Akar.

It’s about the life of a 13-year old refugee boy from Alleppo, Syria who migrated to Anakara, Turkey.

The video is eerie and hypnotic as it walks you through the eyes of this little boy and the misery of his life.

While to me it represents the dark side of life, there is so much to be explored and felt from it.

You can’t watch this without feeling like you are there on this dirty, squalor of a road to nowhere, but wanting desperately to know where it ends.  😉 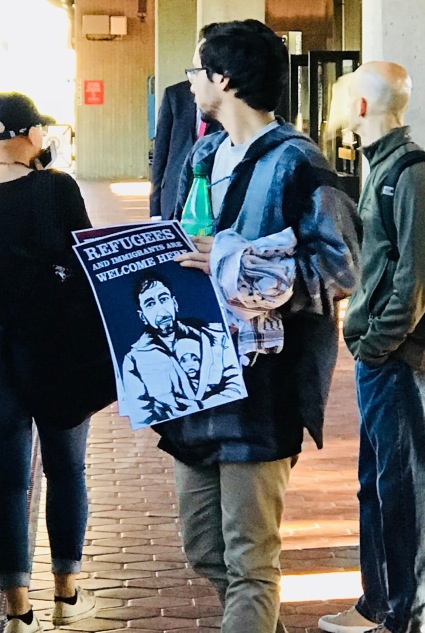 So it’s interesting how this whole immigration crisis is playing out in real life and simultaneously on TV.

In real life, we have a caravan of thousands of people marching from Central America (Honduras and Guatemala) to the U.S. border seeking asylum, mostly for economic reasons.

On TV, we have the Last Ship Season 5, where South and Central America are at war with the U.S., “no longer willing to sit at the children’s table of international politics,” and they are coming to the U.S. to fight.

In the U.S. today, there are over 40 million people that were born in another country.  Of these, there are over 12 million immigrants living illegally in the U.S. (55% from Mexico), and we know that we need immigration reform.

In the truest sense, we are almost all of us immigrants to this country, with ourselves or our families coming over at one time or another, and we are grateful for the generosity and open doors that allowed us to come here and make a good life.

Of course, we want to pay it forward and give others the same asylum and opportunity that we had and which they as human beings deserve.

Yet, the country continues to debate the mix of compassion and giving to the oppressed and needy versus the merit principles for bringing in needed skills, talents, and investment, and how many is the “right” number to allow in at any one time.

In real life, we are beefing up border agents, building a wall, and calling in the military to halt the illegal flow of immigrants, so that we can channel immigrates through a process and vetting that leads to legal and safe immigration to this country

On TV, we are fighting in the air, on land, and at sea an alliance of countries from the south and central that want to take over the U.S., and we are also holding our own and holding them back.

In both cases, we need to have and maintain borders to be a sovereign country, to protect our country, and to ensure that caravans of illegal immigrants or foreign troops are not crossing the border and doing harm.

It’s high time for true immigration reform that is compassionate yet principled, but overrunning the border isn’t an option that is practical or fair.  😉

In case you wondered why the United Nations is always so full of sh*t?

– When the U.N. is done aimlessly sitting around watching on the sidelines while weapons of mass destruction proliferate, millions are being killed, maimed or made into refugees, and genocide and war crimes are occurring…

– When the U.N. is done elevating dictators, sponsors of terrorism, and human rights abusers…

– When the U.N. is done denigrating and making endless anti-Semitic resolutions against the democratic and Holy Land of Israel…

– When the U.N. is done laughing at the President of the United States and his accomplishments…

This is what the UNjust United Nations spends our valuable time and dollars on.

This photo of a U.N. garbage truck say it all.

Perhaps, this is the only thing that the U.N. is actually good at!

While we should certainly help immigrant refugees and those in need, we also need to provide adequate vetting and border security for our people.

This does not mean that all immigrants are bad or that we are mean or paranoid, bur rather that we need to take smart and measured precautions in the dangerous times we are living in.

Al Qaeda, ISIS, and other such brutal terrorist organizations have shown they mean murderous business, and they are vowing to strike at the hearts of America and the West.

So while we open our hearts, we can’t close our eyes!

Safeguard America and the good decent people already here, and at the same time be merciful and giving to immigrants, but don’t sacrifice one for the other. 😉

(Source Graphic: Andy Blumenthal with photos adapted from here and here and with attribution to the New York Times and Alan Silver)

So the alt-left and media are all aghast at President Trump placing a temporary travel ban from 7 muslim-majority nations for national security reasons!

That’s out of more than 50 majority Muslim nations in the world or less than 14%.

And these were the countries identified by the former President Obama as the “countries of concern” because of terrorism!

What is also unbelievably amazing is that 6 of these 7 Muslim nations with a temporary ban from President Trump, plus 10 more countries, for a total of 16 Muslim countries have a permanent ban placed on Israeli Jews!

Where is the alt-left and media outrage about this travel ban on Jews?

Oh, apparently for the alt-left, compassion, dignity, equality, and human rights don’t apply to Jews today any more than they did during the Holocaust where 6,000,000 were left to die in a genocide at the brutal hands of the Nazi’s.

To them, a permanent ban on Jews is apparently fine and national security of the United States who cares–that’s what talking out of both sides of the mouth is all about.

So how do we know that Obama, Kerry, and the UN’s position and resolutions against Israel is biased, hateful, and Anti-Semitic?

Let’s briefly look at the 6 ludicrous principles–as applied to the United States and it’s settling the land of the Native American Indians.

– The realistic solution would not involve a return of the Native American Indians to East America, but would involve compensation.

Hmm, how much do we realistically owe the Native American Indians for half the country?

Uh, what does that mean, especially with our estimated 11.4 million illegal immigrants in the U.S. already???

– For the U.S., “this must bring broader peace” with South American neighbors (including Mexico, Cuba, Venezuela, etc.) and would allow “groundbreaking” security partnerships with others like Russia, China, Iran, and North Korea.

Wonder how that would all work out, huh???

The main difference between the U.S. and Israel is that actually Jews were promised the land of Israel by G-d him/herself and the Jews have actually lived and worshipped there for 4,000 years!

If Obama, Kerry, and the United Nations want to lecture on a Two State Only Solution, perhaps they need to start by contacting the Native American Indians and getting out their drawing boards. 😉

(Source Graphics: By Andy Blumenthal adapted from here and here)

I have never heard so much about the coming of the end of the world, Armageddon, the Apocalypse, and World War III as I am hearing these days…

The world seems to truly be going mad.

And that MAD is as in CRAZY and as in Mutually Assured Destruction.

– 25 years after the end of the Cold War, we are back in a nuclear arms race with Russia!

– Despite being our largest trading and economic partner, we are now going head-to-head confronting China over trade, Taiwan, and the South China Sea!

– While setting some near-term constraints, we have in effect solidified Iran’s getting the nuclear bomb!

– As North Korea continues developing and testing nukes and ballistic missiles, we have no answers for how to deal with them!

Not only have we failed to contain the many threats we face, but also in many or most cases, we have made them worse.

– The Middle East has gone from the promise of an Arab Spring to instead raging in flames and becoming the modern-day killing fields.

– Even as ISIS becomes more dangerous despite having less territory, they are likely eclipsed by Iran’s global terror expansion as a threat to the world order.

– The refugee crisis has meant that ISIS terrorists have infiltrated our borders and are now living among us ready to strike at will.

– There is a real documented threat of a terrorist attack using radiological, chemical, biological, or nuclear weapons of mass destruction!

– The European Union is falling apart and it’s future is unknown.

– Increasing border attacks and escalating tensions are creating a risk of a dangerous Indian-Pakistani War.

Obama has alienated our allies, reduced our stature among the nations, and destabilized the world.

– While people are arguing over the state of hopelessness since the election or from before it, either way, there is huge divisiveness in America.

– Gun ownership is soaring and people are stockpiling ammo.

– Videos have emerged from people in near-death experiences claiming to have vividly seen the coming World War III and the prelude to the coming of the messiah.

– There is even widespread recognition by our space experts that we are woefully unprepared for an errant asteroid or comet hitting the Earth.

Clergy is warning and encouraging us to repent and do good deeds to merit G-d saving us from the coming cataclysm, whatever it ends up being.

I am certainly not a forecaster of doom and gloom, but always try to remain hopeful and encourage everyone to do their best to improve the world.

But I also must reflect on the voices of anger, frustration, and exasperation around the world that are growing ever louder and scarier daily…the latest with Obama’s betrayal of Israel at the United Nations Security Council.

What comes next politically may very well determine whether the end is near or the future gets bright again. 😉

What a way to handle global leadership…all you have to say is,  just “Cut it out!” and your job is done.

– Cyber attacking the U.S. democratic election, invasion of Crimea, and encroaching on NATO with nuclear capable missiles…just cut it out!

– Vast destruction of Aleppo including hospitals, schools, and markets, killings, refugees, and humanitarian crisis, and the dangerous use of chemical weapons on civilians…just cut it out!

– China stealing our drone and militarizing the South China Sea…just cut it out!

– North Korea testing advanced nukes and ballistic missiles capable of reaching Europe and America and threatening to use them…just cut it out!

– Iran taking our sailors captive, humiliating them, buzzing our warships, and violating the nuclear arms deal…just cut it out!

– Abandoning our friends and allies and befriending our enemies sworn to kill us and not even being able to say the words, “Radical Islamist”…just cut it out!

– Spiraling divisiveness, rioting in our inner cities, and cycles of racial and police violence…just cut it out!

– An unsustainable Obamacare with double digit rising rates and decreasing insurance choices (many localities with only 1)…just cut it out!

– Doubling of the U.S. national debt by another $10 trillion and enacting regulations that are strangling business…just cut it out!

– Endless ISIS and other terrorist attacks (yesterday on Berlin, Zurich, Turkey and more) and calls it “workplace violence” or a traffic accident…just cut it out!

Anyone who says that now “We’re feeling what not having hope feels like,” truly must be referring to where we come from and not where we are going.

Here is the current state of a sampling of U.S. relationships with other countries around the world.

As the “superpower” and as a people who strongly value freedom, democracy, and human rights, as well as a people mainly of faith, we have the obligation to do good in this world.

Also, we recognize our imperative to maintain strength and promote peace, prosperity, and betterment for all mankind.

We have some enormous challenges ahead, and we had better be up to it.

There is a lot riding on this! 😉