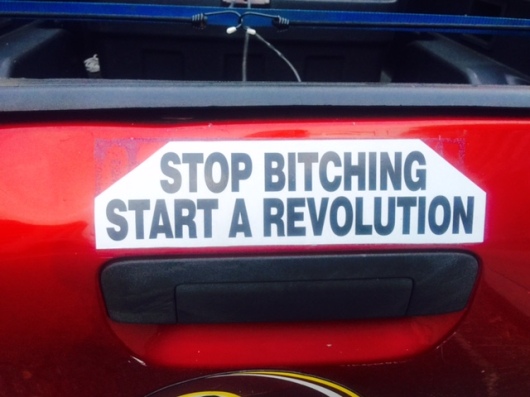 I took this photo of a bumper sticker on a pickup truck in Washington, D.C.

So I’m thinking this is not the type of message you like to see in the capital of the country.

But looking beyond the call by whomever for a forcible overthrow of the government (yeah, hopefully they don’t mean it)…

Not a real revolution, but an evolution of change–incremental change, even baby steps, but leading to positive and constructive betterment!

Stop just huffing and puffing about this and that.

Consider speaking up, coming up with new and better ideas, advocating for something more, and actually helping to build it.

The guillotine is normally not the solution (French Revolution aside)–but that doesn’t mean you can’t do squat. 😉 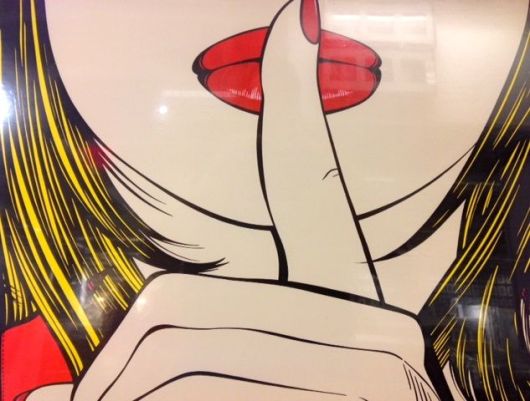 Shhh! This is the story of drones.

Drones continue to go from battlefield to backyard.

Initially, developed for advanced persistent surveillance and later weaponized for targeting terrorists, we heard the like of Jeff Bezos promise drones for Amazon delivery.

Once again, the double-edge of drones continues…

This week we saw the introduction of scary, “Riot Control Drones” developed by Desert Wolf (a military contractor) that can shoot 4,000 rounds of pepper spray, paint balls, and non-lethal plastic projectiles, employs bright strobe lights and blinding lasers, and issues commands and warnings through loud speakers, and monitors crowds of protesters by high-definition and thermal vision cameras.

At the same time, we saw drones being used as Flying Bel Hops in the luxury Casa Madrona hotel and spa in California for delivering champagne, treats, toys, and even sunglasses to their $10,000 a night guests on their guest deck or even to a boat out on the bay.

And we are still only at the beginning, with drones, and robotics in general, moving to revolutionize our world.

Robots will surveil, they will attack and kill, and they will serve people everywhere from restaurants and retail to hospitals and homes.

You can’t shush the robots, they are on the march and they will have the means to help and hurt people–it won’t be simple, but it definitely will be completely invasive. 😉

How many of you feel sort of disgusting every time you take out the trash with bottles and containers?


According to Earth911, only 27% of plastic and 25% of glass ends up getting recycled, with the majority ending up instead in landfills.


This is one reason that I really like the new eco.bottles made by Ecologic, a sustainable (i.e. green) packaging company.


The containers are made of two parts:


– The inner plastic pouch that holds the liquid and snaps into the second part.
– The outer shell made of 100% recycled cardboard and newspaper (and in turn is 100% recycable again).


These containers result is a net 70% plastic reduction!


Yet, they have the same strength and functionality of plastic containers, with comparable results in drop, ship, and moisture tests.


And companies like, Seventh Generation, a leader in sustaibable cleaning, paper, and personal care products have signed on and is using eco.bottles, and they have seen sales increase 19% with it.


In a Bloomberg BusinessWeek (25 October 2012) article, the chief operating officer of The Winning Combination states: “The minute you look at it, you get it. This is a bottle that’s good for the planet.”


Like these eco.bottles, we need more of our decisions to be driven by what is good for us long-term, so this is not just a revolutionary green bottle, but perhaps a true sustainable evolution in our thinking and behaving all around.
Join 289 other followers