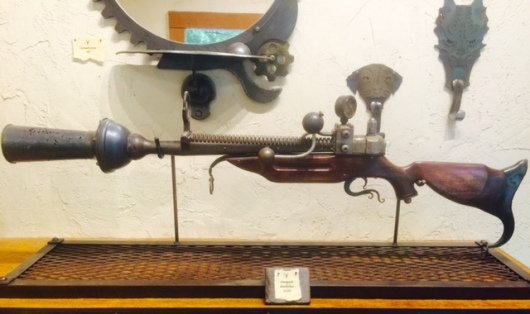 So I learned that there are at least 2 things to be mindful of when it comes to a firing squad:

1. Never get between a man and his firing squad — sometimes, the judgment has already been passed, the victim blindfolded and tied, the trigger(s) already pulled back and the victim is too far gone to save.  Don’t step in front of the bullet!

2. When it is a circular firing squad, rise above it! — when people are engaged in self-destructive, internal disputes, recriminations, and taking pot shots at each other,  you need to either duck or rise above the fray and be the bigger man/woman.

Shooting the messenger, the interventionist, or each other just leaves a lot of spilt blood.

Save yourself and stay focused and determined to fight for the issue, when others are simply determined to take someone out back and put the bullet through their head. 😉

The Wall Street Journal, 11 September 2007 reports that the “everyone knows blaming the blameless bearer of bad news doesn’t help, but we do it anyway. It’s…the gulf between knowing a problem and solving it.”

The article continues, “Big bureaucracies are set up to place human barriers around decision makers. Today there’s the added protection of automated phones and web sites that bury contact information for real people. So the buck stops in the lower rungs of the hierarchy.”

“The government agency…sent lower level staffers to break news to clients that they didn’t get approved…’the true irony of the situation is sending in someone who is less qualified to address a hostile situation, and that creates more hostility, which makes it more likely for him to get shot.’”

The following day, 12 September 2007, the Wall Street Journal reported in another article about another situation of shooting the messenger, as follows: “American Airlines told the Transportation Security Administration in July, that a passenger on a flight to New York had slapped a flight attendant across the face when the plane was ordered emptied in Miami after bad weather kept the flight from leaving. Police were called.”

As EA practitioners, we are often the messengers of corporate news; we analyze problems areas and uncover gaps, redundancies, inefficiencies, and opportunities. Often, others in the organization do not want to hear about these problems and do not want EA to be providing the solutions. Instead, they look to shoot the EA messenger. Rather than pointing fingers and letting off steam at the EA folks doing their jobs, how about teaming up, collaborating, and working to improve the organization and make things better for everyone!