The Defense Advanced Research Projects Agency (DARPA) has come up with a Reconfigurable Wheel Track (RWT).

The tires can switch shape from round tires for flat terrain to triangular tracks for soft or rugged terrain in just 2-seconds!

You can see in the screenshot the rear wheels in tire formation and the front wheels changed to tracks.

The agility of this technology makes for better maneuverability and survivability for our troops and their transports and combat vehicles.

I wonder if someday soon, they will commercialize this technology so rather than all season/year tires or snow tires on our cars, we have these gorgeous ruggedized military grade babies.

I for one would gladly pay extra! 😉

One well-placed nuclear suitcase bomb or nuclear ballistic missile strike on DC and say goodbye to virtually the entire hub of the Federal government.

Over 500K are located in the DC, MD, VA tristate area.

But it’s not just the numbers, it’s that the headquarters of all the major government agencies are located here.

While, of course, there are backup sites, and emergency doomsday sites like Mount Weather (48 miles from DC), there is no telling how much advance notice, if any we would have, and who would escape and survive a deadly blow to our capital region.

And it could be a radiological, chemical, biological, or nuclear (RCBN) attack that does us in…whether from Russia, China, Iran, North Korea or other diabolical enemy out there.

The point is that by concentrating all our federal headquarters and senior leadership and key resources here we are in fact, giving the enemy an easy shot to decapitate the entire country?

While others (like Paul Kupiec in the WSJ) have questioned whether some of the federal agencies can be moved out to other needy cities and communities across the country for economic reasons (to bring jobs and investment) especially those agencies that are actively looking to build new HQS buildings already (e.g. FBI and Department of Labor), to me the far more potent question is one of national security.

The main advantage of having the crux of the federal government in the DC area is surely one of coordination–the President wants his Cabinet near him and the Cabinet Secretaries want their senior staff near them, and so on and so on.

So, you get this mass concentration of a who’s who of the federal government in and around Washington, DC.

But what about the advances of technology?

Surely, through networks and telecommunications and teleworking, we can support a geographically diverse workforce and do no significant harm to our operating as one.

It’s one thing to have nuclear missiles roaming the seas on attack submarines waiting for orders from Washington, DC and it’s quite another to move the actual government intelligentsia and leadership out from the central hub.

Let’s face it, in a real crisis situation, with the chaos and panic and transportation overflow and perhaps simultaneous cyberattacks, no one is really going to be going anywhere–especially in a surprise attack.

If Pearl Harbor (of which we just celebrated the 75th anniversary) and 9/11 teach us anything is that when the sh*t hits the fan, it hits hard and sticks solid.

Working in the Metro DC area, selfishly, I’d like to say keep the investment, jobs, and great opportunities here.

For the good of the nation and our survival against true existential threats, we’d be much smarter to spread the federal wealth as far and wide across this great nation that we can. 😉

I liked this concept reported on in BBC Technology about using swarms of sensors to create a type of electronic or “smart skin.”

Like nerves in our human skin, multitudes of sensors placed on anything that we want to monitor, could create a sensing/feeling and reporting mechanism for evaluating the health or condition of that thing.

Rather than wait for something to fail or break, we could actively collect information on changes in “temperature, strain, and movement” and other environmental impacts to analyze and predict any issues and proactively address them with countermeasures, maintenance, or fixes.

As human beings, we are architected with regular monitoring and self-healing biological systems to protect ourselves from daily dangers around us, we can develop homes, factories, transport, robots, and everything important around us with similar properties to be more durable, last longer and be more productive.

When we emulate in our own development efforts what G-d has created for the good in the world, we are on the right track. 😉

There was significant news this week about the U.S. and Israel making major inroads with cyberwar capabilities.

First, the New York Times today (1 June 2011) writes about alleged Bush and Obama administrations’ “increasingly sophisticated [cyber] attacks on the computer systems that run Iran’s main nuclear enrichment facilities”–sabotaging as many as a 1000 centrifuges, delaying their deadly program by as much as 2 years, as well as conducting cyber espionage to strengthen our negotiating hand.

The malware included such programs such as Stuxnet, Duqu, and The Flame and according to Bloomberg BusinessWeek (30 May 2012) may date as far back to 2007.

These cyber attacks have been viewed as the best hope of slowing the Iranian’s sinister nuclear program while economic sanctions have a chance to bite.

At the same time, the use of cyber weapons is a double-edged sword–if we use it on others, this may encourage cyber proliferation and it’s eventual use on us–and as the NYT writes, “no country’s infrastructure is more dependent on computer systems and thus, more vulnerable to attack than the United States.”

Therefore, it was good to see in The Washington Post yesterday (30 May 2012) that the Pentagon’s Defense Advanced Research Projects Agency (DARPA) is pursuing Plan X–“ambitious efforts to develop technologies to improve its cyberwarfare capabilities, launch effective attacks, and withstand likely retaliation.”

“If they achieve it, they’re talking about being able to dominate the digital battlefield just like they do the traditional battlefield.”
The “five-year $110 million research program” is seeking to accomplish three major goals in arming U.S. Cyber Command at Fort Meade for cyber war:

1) Mapping Cyberspace–create realtime mapping of the entire cyberspace and all its devices for commanders to use in identifying targets and disabling them and seeing enemy attacks.

2) Building A Survivable O/S–Just like DARPA invented the Internet as a survivable messaging and communication system, so too, they want to develop a battle-ready operating system for our computers (like a tank) “capable of launching attacks and surviving counterattacks.”

Just to be clear, with cyber warfare, we are not just talking about computers taking out other computers–and end there, but rather this is where computers take out computers that are controlling critical infrastructure such as the power grid, transportation systems, financial systems, supply chain, command, control, and communications, weapons systems, and more.

“Cyberwar could be more humane than pulverizing [targets]…with bombs,” but I doubt it will be.

Imagine, virtually everything you know coming to a complete halt–utter disruption and pandemonium–as well as the physical effects of that which would ensue–that’s what cyber war is all about–and it is already on the way.

So as, Richard M. George, a former NSA cyberdefense official stated: “Other countries are preparing for a cyberwar. If we’re not pushing the envelope in cyber, somebody else will.”

It is good to see us getting out in front of this cyber security monster–let’s hope, pray, and do everything we can to stay on top as the cyberspace superpower. 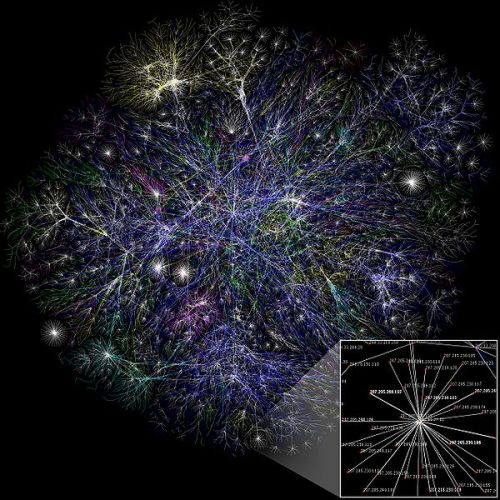 We have been taught that the Internet, developed by the Department of Defense Advanced Research Projects Agency (DARPA), was designed to survive as a communications mechanism even in nuclear war–that was its purpose.

Last year, I learned about studies at the University of Minnesota that demonstrated how an attack with just 250,000 botnets could shut down the Internet in only20 minutes.

Again last month, New Scientist (11 February 2012) reported: “a new cyberweapon could take down the entireInternet–and there is not much that current defences can do to stop it.”

Imagine what your life would be like without Internet connectivity for a day, a week, or how about months to reconstitute!

This attack is called ZMW (after its three creators Zhang, Mao, and Wang) and involves disrupting routers by breaking and reforming links, which would cause them to send out border gateway protocol (BGP) updates to reroute Internet traffic.  After 20 minutes, the extreme load brings the routing capabilities of the Internet down–” the Internet would be so full of holes that communication would become impossible.”

Moreover, an attacking nation could preserve their internal network, by proverbially pulling up their “digital drawbridge” and disconnecting from the Internet, so while everyone else is taken down, they as a nation continue unharmed.

While The Cybersecurity Act of 2012, which encourages companies and government to share information (i.e. cybersecurity exchanges) and requires that critical infrastructure meet standards set by The Department of Homeland Security and industry are steps in the right direction, I would like to see the new bills go even further with a significant infusion of new resources to securing the Internet.

An article in Bloomberg Businessweek (12-18 March 2012) states that organizations “would need to increase their cybersecurity almost ninetimes over…to achieve security that could repel [even] 95% of attacks.”

Aside from pure money to invest in new cybersecurity tools and infrastructure, we need to invest in a new cyberwarrior with competitions, scholarships, and schools dedicated to advancing our people capabilities to be the best in the world to fight the cyber fight. We have special schools with highly selective and competitive requirements to become special forces like the Navy SEALS or to work on Wall Street trading securities and doing IPOs–we need the equivalent or better–for the cyberwarrior.

Time is of the essence to get these cyber capabilities to where they should be, must be–and we need to act now.

(Source Photo of partial Internet in 2005: here, with attribution to Dodek)