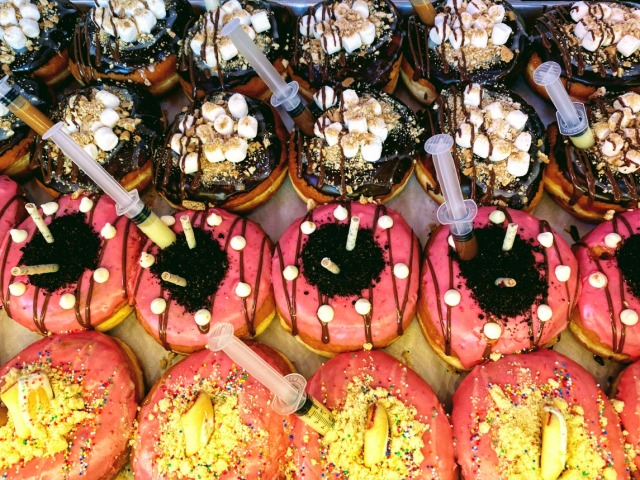 So I never actually saw donuts being sold with the syringe.

I get that they use the syringe to put the custard, jelly, and other fillings inside.

But leaving the syringe hanging out of the donuts like that conjures up images of addicts and junkies.

DESPITE that, these incredibly rich and overflowing donuts with gobs of toppings were some of the finest I’ve ever seen.

Takes more than a good dose of willpower to resist and not become an addict of these carbohydrate powerhouses.

Totally awesome new technology breakthrough for treating hemorraging patients from the battlefield to the obstetrics ward.

Popular Science reports how a pocket-size syringe filled with sponges can stop bleeding in seconds.

Instead of having to apply wads of gauze and apply pressure”that doesn’t always work…[and] medic must pull out all the gauze and start over again,” the injection of sponges into the wound “boosts survival and spares injured soldiers from additional pain.”

This same technology developed by RevMedx for the military is being adapted for postpartum hemmorages, and I would imagine could eventually be used in other serious bleeding cases whether caused by accident, trauma, in surgery, or other medical necessity.

The sponges are about 1-centimeter circles and are coated with a blood-clotting, antimicrobial substance.

Once injected, the sponges expand to about 20 times their size to fill the wound, apply enough pressure to stop the bleending, and clings to moist surfaces, so they aren’t forced out by gushing blood.

The sponges have X-shaped markers on each that are visible on an x-ray image to ensure none are left inside.

The solution is sterile, biocompatible and in the future may be biodegradable so they don’t have to be removed from the body.

And to think that the inspiration was Fix-a-Flat foam for emergency tire repair. 😉