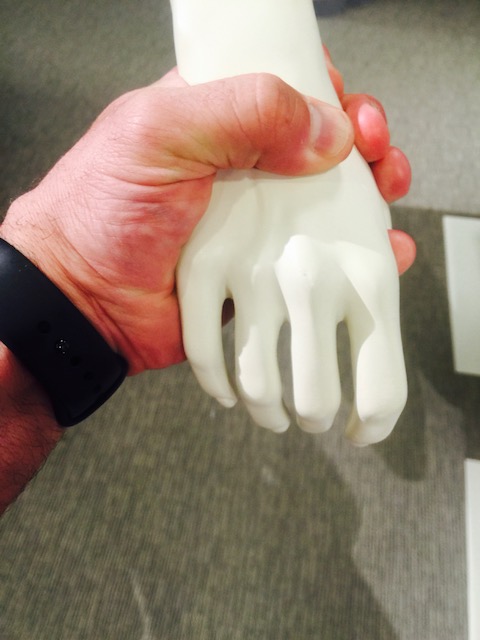 So the other night I dreamed.

And in the dream, an angel came to me and was over me as I lay down.

The angel had it’s finger pointing at my head in the right temple area.

The finger was all white and while I could feel it having a solid state, it was able to pass in a non-solid state, transparently through the surface and slightly into my head.

I felt pressure applied there and almost like a healing feeling.

The angel was pure white–like a holy marble, but not like marble.

It was majestic, slender, and tall.

It had white feathery wings that were taller than it’s body.

Its feet were like a smooth and solid arch, and did not have toes.

The angel hovered over my upper body, head area, and was looking at me and touching my right temple–with care and love.

It was absolutely clear to me that the angel visiting me was my dear, dear father.

Although, I woke with a slight headache, I felt happy and at great peace by his visit.

The experience was caring, loving, holy and I was uplifted by it.

With his unbelievably pure and giving heart, it was beautiful to see my father as an angel–this was him all along. 😉

What beauties these purple flowers are?

Tall on the thin green stem.

And then ballooning and budding out into these futuristic spherical lattice-shaped flowers.

Almost like soft clouds that we can reach out and touch (and touch too hard, and the flowers just fall off into the breeze).

But think again with technical imagery and these can be an advanced interconnected living neural network that with “big data” can solve all our information and artificial intelligence needs.

A swarm of living and dying nodes and sprouting forth again with a natural processing function.

A gorgeous flower, but you can imagine it as so much more. 😉

So I wanted to share this amazing and scary story (true) that happened to me a number of years ago.

I went with my daughter to visit the U.S. Holocaust Memorial Museum in Washington, D.C.

One of their exhibits is of a cattle car train used to transport Jews in the Holocaust to the infamous Auschwitz concentration camp.

I remember how frightening it was to see this actual train car (the likes of which I had previously only seen in the movies) where hundreds of thousands of people were herded aboard like animals for the torturous trip to their ultimate murderous and inhuman deaths.

At the exhibit, I’m not sure that I was supposed to do this, but being a very tactile person, I reached out to touch the train car, maybe partly because I could not believe this was the real thing where such human horrors had occurred.

Immediately upon touching it, something happened to me–for a moment, everything went black and then I experienced an intense flashback (like being transported back in time and place) to literally being there with the actual people stuffed into these cattle cars–without food, water, sanitation, or enough air to breath–and I could see up close their anguished faces, and actually hear them screaming.

First, I thought I have a vivid imagination and that all the studies on the holocaust and my family being survivors had really had an impact on me.

But then something else happened to me.

When I left the Holocaust Museum, I started to get a crazy sharp pain in the side of my neck. Not a soar throat, but like my throat just wasn’t working right.

I tried to sort of ignore it, but over the course of the day, it got worse and worse, as my breathing was becoming ever more difficult, and it felt like I was actually choking to death–my life was in danger.

I was rushed to the hospital emergency room, and at first they weren’t sure what was happening to me, and so they started a whole series of tests.

Crazy enough the tests revealed a deep tissue infection right in the side of my neck, and based on the danger to my breathing and swallowing, the doctors came in to talk with me about doing emergency throat emergency.

I couldn’t believe what was happening–out of the blue, I touched that death car to Auschwitz and next thing I know, I had a severe tissue infection and my life was hanging by a thread.

Again unexplainably, but thank G-d miraculously, overnight the dangerous infection literally just disappeared as mysteriously as it was born into my neck tissue–the doctors could not explain it!

The Holocaust which claimed six million Jewish lives–men, women, children–in perhaps the most evil and hideous human event in history, and I felt like I had just been transported back in time and touched not just the car, but the actual history and event itself.

I am left with this mysterious event in my life, it was scary and dangerous, and when they say don’t touch the exhibits, I think I will listen next time. 😉

My wife always tells me she needs a lot of personal space–she likes time and focus to do “her thing.”

No one nagging, yapping, coming around, asking for things…just some quiet time for herself.

I can appreciate that–we all need time to think, be creative, take care of personal things, and pursue our own interests.

At the same time, people need other people.

When we are done doing our things, we need human interaction, attention, conversation, sharing, touch.

I saw a few things this week that really brought this home:

1) The Netflix show “Orange Is The New Black” about a young woman put in jail and how she handles all the challenges of being incarcerated with literally a cast of characters. But in one scene in particular, she is thrown in the SHU (Solitary Housing Unit) and within about a day, she is hearing voices and talking to someone that isn’t there. Alone, she crawls up into a ball–like a baby–craving someone to come, anyone.

2) Visiting the nursing home today, I saw many old people screaming for help. It is a really nice nursing home as far as they go, and the people apparently weren’t screaming because of mistreatment, but rather for attention–a human being to be there interacting with them. Interestingly, even when the old people are sitting together, they are still yelling in a sort of helpless anguish being alone, only calming down when a family, friend, or caretaker comes over to them, touches their hand or hugs them, asks about their wellbeing, and shows genuine human caring. Yes, they have real physical needs they call out for help for too, but I think even many of those calls for help–too many and too often to all be for actual needs–are just for someone to come around and pay them attention and be there with them.

3) I remember years ago, seeing some parents put their child to sleep at night. But the child wanted their parent to sit with them and comfort them while they drifted off to sleep. But this parent strictly followed the Dr. Spock guidance that you just let them cry it out, and boy did this little girl cry and cry and cry. I said to my wife, this is not the right way–it can’t be. And I myself always fought that the children should be held and comforted when they cried, not forced at such a tender young age to be alone and “self-sufficient.”

While people need time and space for themselves, even the biggest introvert among us needs other people.

In solitary, people can literally lose their mind–alone, scared, desperate, but solitary doesn’t have to be a prison, it can be an emotional and mental condition where people are craving even just a hug from someone who gives a damn.