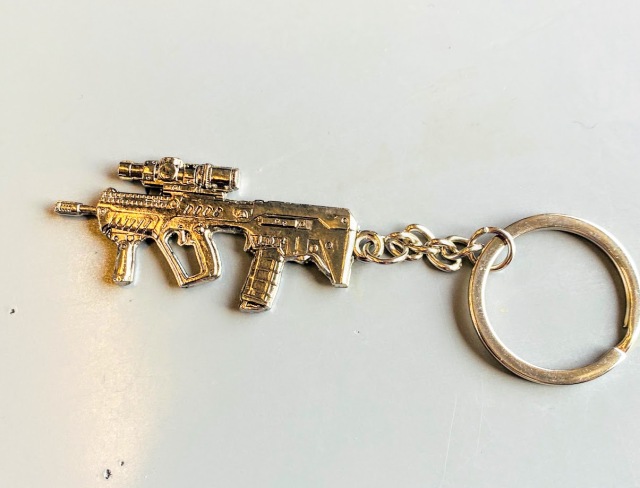 Love my new keychain with the Tavor.

The short stock makes this very versatile yet it packs a hell lot of fire power.

Good reminder for me of “Never again!” 😉

(Credit Photo: Andy Blumenthal, and thank you to my son-in-law for the thoughtful gift)

This adjustable computer desk stand from Veridesk for sitting and standing is awesome.

Someone got this in the office, and it is the talk of the town.

It comes as one piece, no assembly required and you just place it under your computer–simple, easy!

Just push the handles on either side and the desk height adjusts variably up or down.

I found it on Amazon for just $325-$400 depending on the size and whether you have a double monitor.

My colleague at work said just try it and you will feel so good–this seems like a good healthy deal. 😉

http://c.brightcove.com/services/viewer/federated_f9?isVid=1&isUI=1
I don’t endorse this vendor or product, but this BAE BvS 10 Viking military vehicle used by the UK Royal Marines (and others) is something to see.
It is amphibious, all terrain combat vehicle and can be configured for troop transport, command and control, repair and recovery, ambulance, and even carrying UAVs.
What is fascinating to me is the combination of the speed and versatility of this thing.
The 2-part vehicle (as well as the front antennas) give the effect of a caterpillar–rocking and rolling–making its way over any surface.
In theatre in Afghanistan since 2006, this combat technology is being tested and improved with additional armor and more power.
As mentioned by Defense Tech, it would be cool if in its next evolution, it could deflect Improvised Explosive Devices (IEDs) like the Mine Resistant Ambush Protected (MRAP) vehicles with their V-shaped hull, which is so important for protecting our troops.
(Credit Picture: Joost J. Bakker)

From Inspector Gadget to Transformers–there is more than one purpose to everything and that is the type of flexibility that we need to be agile, competitive, and efficient.

Miche Bags is a new amazing example of a company that has “got it” in terms of architecting their products for re-use.

The bags work in 3 easy steps:
1) Consumers pick a bag base–big or small.
2) Then they choose the shell (design) on the outside that they like–and this can be changed out as often as desired.
3) Finally, there are plenty of accessories–organizers and straps to select from.
Viola, your own bag creation; tire of it–and choose something else and simply swap it out.
According to CNBC, the idea for the changeable bags came when to the owner when she spilled something on one of her bags and wished that she could just change it out.
Sure, sometimes, it’s nice to have a whole new product–take my old smelly sneakers for an example–those have got to go! 🙂
But at other times, it can just make more economical and environmental sense to just freshen up a product with a change or new look.
Cell phones and smartphones seemed to have gotten that idea in their changeable “skins” that let people snap on and off different colors, textures, and materials.
Another example is Crocs (shoes) that accessorize with Jibbitz or colorful charms that snap into the holes on the shoes–these range from sports team to Disney characters, flowers, flags, and more.
Of course, there’s lots of other, more familiar examples–reversible belts and coats and removable comforter covers just to name a few.
In a dynamic and faced-paced world, where at the same time resources are more and more constrained, the ability to change out components and at the same time reuse basic elements is what is needed more than ever.
It’s great to have the versatility to personalize and accessorize skins, but it’s even better and more powerful to be able to change out components–like expanding the memory on our computers.
Like Inspector Gadget, you never know when a cap that changes to a “whirlybird propeller” that flies you out of harm’s way will come in handy!