Interesting message on this car window:

Imagine all the wonderful things that will never happen if you do not do them.

You’ve got to get up and get out there and try.

Success is within reach.

That’s a cool way to point something out.

Sort of unexpected sticking out of the wall like that.

But effective use of visualization.

Just a saying from Dr. Ferry Porsche (as in Porsche cars) that I liked:

“It has always been a principal of our company that function and beauty are inseparable.”

If you can make something useful and attractive–you have a real winner!

Companies like Porsche and Apple get it (many, many others are clueless).

Product development is both art and science and therein lay the foundations of their success or failure. 😉 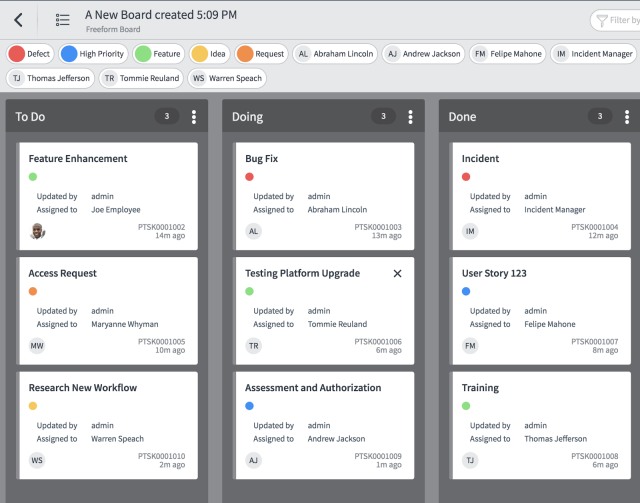 This is a way to layout work/workflow and track and communicate progress.

Previously, many professionals use colored sticky notes on a wall or whiteboard.

Today, tools like ServiceNow have the capability built right in.

This was an example that I created in just a few minutes.

Visualize your team’s work and focus on what needs to get done, who the tasks are assigned to, the status, and keep driving continuous improvement in the workflow and project.

Color coding can be used for different tasks and you can see the legend at the top.

Tasks can be easily dragged and dropped from one column (status) to another.

One of the most exciting emerging technologies out there is Augmented Reality (AR). While the term has been around since approximately 1990, the technology is only really beginning to take off now for consumer uses.

In augmented reality, you layer computer-generated information over real world physical environment. This computer generated imagery is seen through special eye wear such as contacts, glasses, monocles, or perhaps even projected as a 3-D image display in front off you.

With the overlay of computer information, important context can be added to everyday content that you are sensing. This takes place when names and other information are layered over people, places, and things to give them meaning and greater value to us.

Augmented reality is really a form of mashups, where information is combined (i.e. content aggregration) from multiple sources to create a higher order of information with enhanced end-user value.

In AR, multiple layers of information can be available and users can switch between them easily at the press of a button, swipe of a screen, or even a verbal command.

Fast Company, November 2009, provides some modern day examples of how this AR technology is being used:

Yelp’s iPhone App—“Let’s viewers point there phone down a street and get Yelp star ratings for merchants.”

Michael Zollner, an AR researcher, puts it this way: “We have a vast amount of data on the Web, but today we see it on a flat screen. It’s only a small step to see all of it superimposed on our lives.”

Maarteen Lens-FitzGerald, a cofounder of Layar, said: “As the technology improves, AR apps will be able to recognize faces and physical objects [i.e. facial and object recognition] and render detailed 3-D animation sequences.”

According to Fast Company, it will be like having “Terminator eyes,” that see everything, but with all the information about it in real time running over or alongside the image.

AR has been in use for fighter pilots and museum exhibits and trade shows for a number of years, but with the explosive growth of the data available on the Internet, mobile communication devices, and wireless technology, we now have a much greater capability to superimpose data on everything, everywhere.

The need to “get online” and “look things up” will soon be supplanted by the real time linkage of information and imagery. We will soon be walking around in a combined real and virtual reality, rather than coming home from the real world and sitting down at a computer to enter a virtual world. The demarcation will disappear to a great extent.

Augmented reality will bring us to a new level of efficiency and effectiveness in using information to act faster, smarter, and more decisively in all our daily activities personally and professionally and in matters of commerce and war.

With AR, we will never see things the same way again!

On September 2, 2009, the Internet celebrated its fortieth birthday.

ComputerWorld (14 Sept. 2009) reports that 40 years ago “computer scientists created the first network connection, a link between two computers at the University of California, Los Angeles.” This was the culmination of research funded by the Defense Advanced Research Projects Agency (DARPA) in the 1960s.

This information technology milestone was followed by another, less than two months later, on October 29 1969, when Leonard Kleinrock “sent a message from UCLA to a node at the Sanford Research Institute in Palo Alto, California.”

While the Internet conceptually become a reality four decades ago, it didn’t really go mainstream until almost the 1990’s—with the founding of the World Wide Web project in 1989, AOL for DOS in 1991, and the Mosaic browser in 1993.

Now, I can barely remember what life was like before the Internet. Like the black and white pictures of yester-year: life was simple and composed, but also sort of lifeless, more boring indeed, and less colorful for sure. In other words, I wouldn’t want to go back.

Also, before the Internet, the world was a lot smaller. Even with connections to others far away—by phone and by plane—people’s day-to-day connections were more limited to those in close proximity—on their block, down on Main Street, or in and around town. It took an extra effort to communicate, share, deal, and interchange with people beyond the immediate area.

At present with the Internet, every email, chat, information share, e-commerce transaction, social media exchange, and application are a blast across the reaches of cyberspace. And like the vastness of the outer space beyond planet Earth, cyber space represents seemingly endless connectivity to others over the Internet.

What will the Next Generation Internet (NGI) bring us?

ComputerWorld suggests the following—many of which are already with us today:

I believe the future Internet is going to be like Second Life on steroids with a virtual environment that is completely immersive—interactive with all five senses and like speaking with Hal the computer, answering your every question and responding to your every need.

It’s going to be great and I’m looking forward to saying “Happy Birthday Internet” for many more decades, assuming we don’t all blow ourselves out of the sky first.