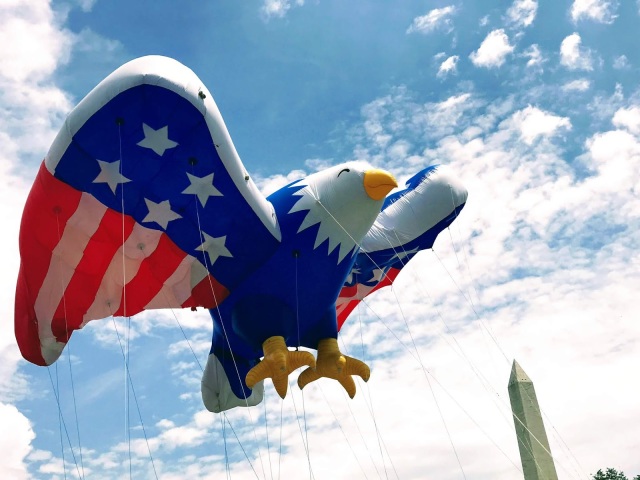 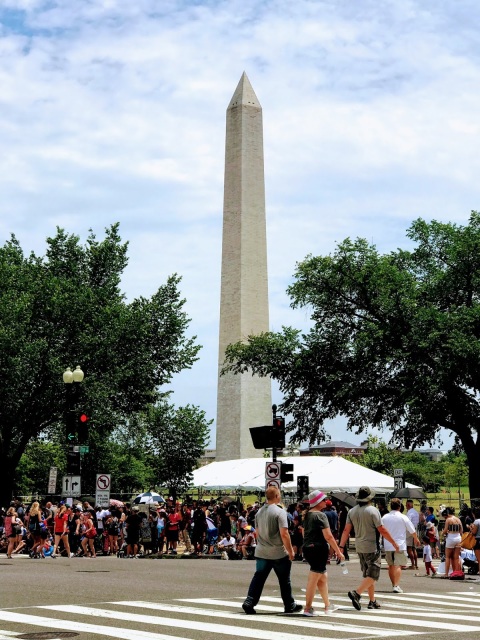 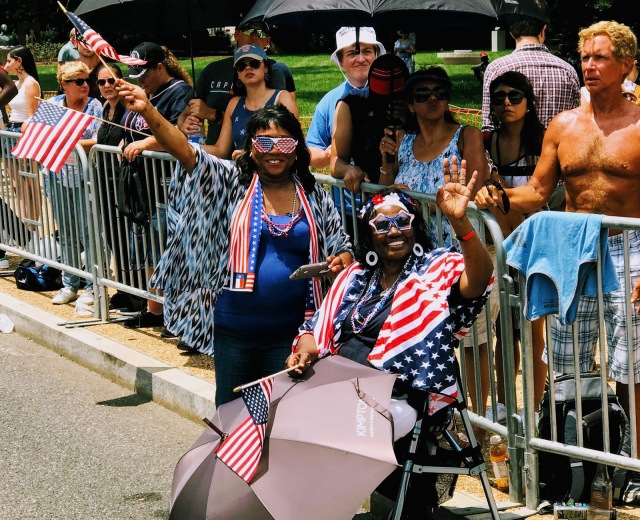 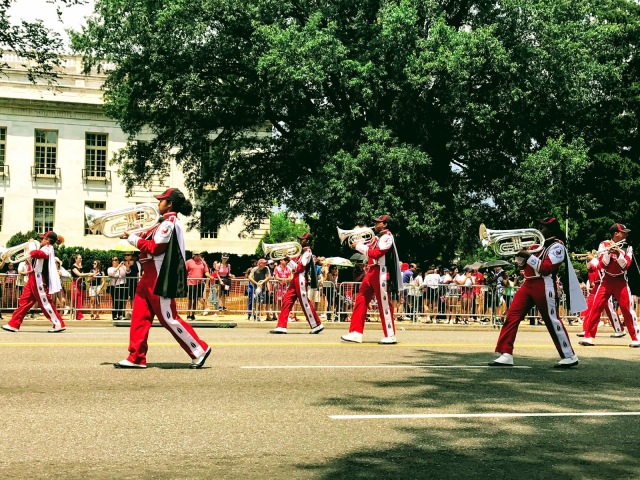 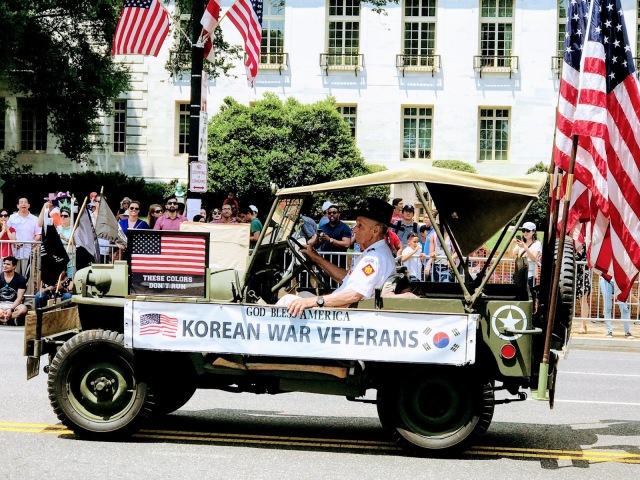 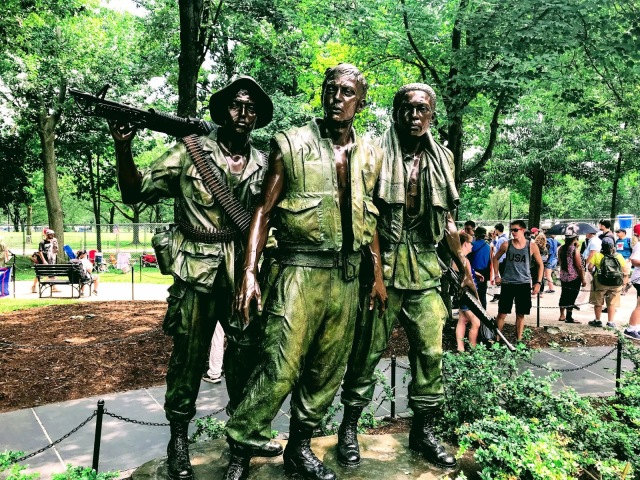 So I took this photo in Starbucks–one of the Baristas in Washington, D.C showing his tattoo.

Not that I am a tattoo guy myself (uh, I’m not!), but I thought this was really an interesting one.

“We The People Of the United States” — our Constitution establishing our nation, freedom, democracy, and human rights here.

Along with pictures of the Capitol, White House, Washington Monument, and Jefferson Memorial (maybe more around the arm…I don’t know).

When I asked him what made him choose this?

He immediately said, “I wasn’t originally thinking of a tattoo, but when I did, I wanted it to mean something!”

So this one wasn’t just a vanity thing, but has meaning to him and I bet to many others–very cool! 😉 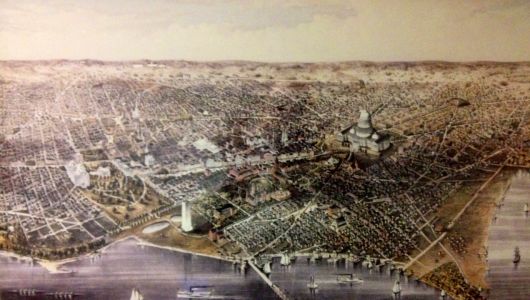 This is a beautiful lithograph from Currier and Ives that I came across of Washington D.C.

It is called Chesapeake Bay Area – The City of Washington.

It’s amazing how much less developed things were just a little more than a century ago.

You can clearly see the major landmarks and institutions like The Capitol, the Washington Monument, and The White House, but not much else in terms of government.

Notice that even the Supreme Court building isn’t there–it wasn’t completed until 1935.

We are a fast-growing and advancing society with a maturing government and capital city that today makes this historical photo look almost as if it’s from fairy tale.

It’s nice to look back and see how far we’ve come and introspect on where we are going. 😉 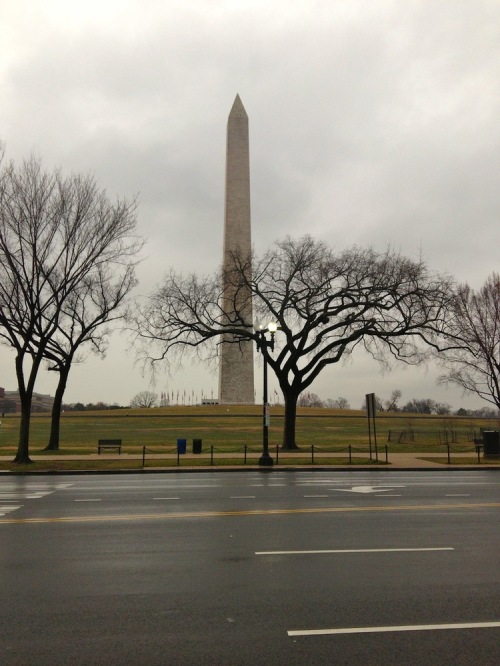 We made it through he fiscal cliff–whew!  But the economic landscape remains a minefield.

In terms of our national debt ceiling, we already passed the $16.4 trillion mark at the beginning of the year and are on borrowed time (no pun intended) until about mid-February when we exhaust accounting gimmicks and can no longer pay our national bills.

Then there is the elusive government budget where we are on a “continuing resolution” that funds the government at the prior years spending levels until the beginning of March; there is no agreement on what the budget should be after that.

Finally, there is the Sequestration that was delayed from the beginning of the year to March, which will produce across the board budget cuts to government–not surgically, but sweeping cuts that will hit almost all major government spending.

All of these budgetary and debt issues are highly contentious and politicized and involve substantial policy decisions in terms of tax reform, spending cuts, and even income and wealth distribution.

As difficult as it is to navigate a mine field, there is genuine fear that our national luck is running out and the sides are digging in such that even if we get over another one of these hurdles (likely by another delay) or even two of these, what are the odds that we get through all three unscathed economically and with our national image and strength intact?

Already in August 2011, S&P lowered the U.S. credit rating because of these unresolved issues and political stalemate around them, and Moody (in September 2012) and Fitch (this past week) threatened the same putting us at risk of higher borrowing costs, inflation, and even recession.

Bloomberg BusinessWeek (3 August 2011) using game theory seemed to advocate for political compromise–that produces a “deal no one likes” but avoids pure political victory by one party over the other where one party gives in and the other holds out, and also avoids “financial Armageddon” where both sides hold out and can’t get any deal done at all.

In games of “chicken” both sides “entertain the option of killing everyone” until they finally realize this results in mutually assured destruction (MAD).

In Washington “everyone, however, is playing a game called ‘election'” and “the only possible goal in that game is to win the next one”–in this game, the real question–is there the leadership to rise above the politics, the short-term focus, and bring the two sides together in compromise to forge a path through a difficult economic road ahead.

Truly, there is really only one way ahead and it is through national sacrifice that will spare no one, but may save the country and our ideals and make us stronger in the end. We are at a dead end for kicking the can further–next step must be to right the ship through cooperation and making the tough choices.

Just like the Washington Monument is one, we must become one. 😉 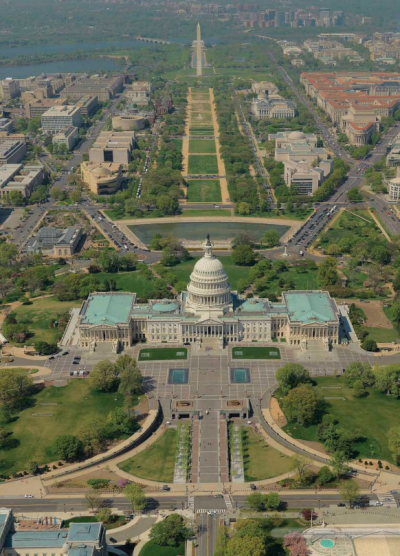 Completely awesome picture of The Capitol of the United States.

(Source: Architect of The Capitol)