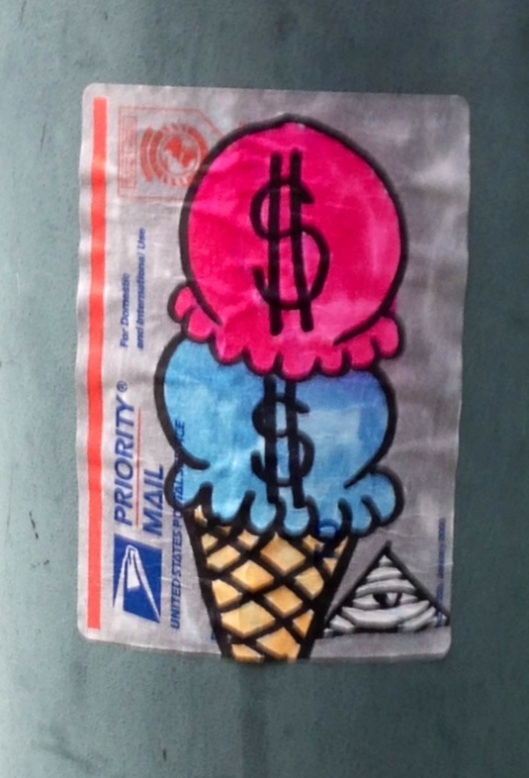 I took this photo this week in downtown Washington, D.C.

A U.S. Postal Service priority mail sticker stuck onto a pole with a picture of ice cream–2 scoops–with dollar signs on them. And an eye in a pyramid on the lower left.

I am not sure whether the mail sticker was just a part of the grafitti here or whether someone was trying to make a statement about the financial state-of-affairs of the Postal Service–losing money–and the loses stacking up over time, as the watchful eye of Government looks on.

I love getting mail like everyone else–except bills and junk mail.

But with a multitude of technology (email, texts, and so on) replacing traditional paper mail–the Post Office needs a new business model.

How about a serious focus on package delivery (for all the e-Commerce ordering we are doing)?

Or then again, would anyone mind an ice cream counter in every post office to make some happy faces and real money? 😉

There is an interesting article in the Wall Street Journal (31 May 2013) about why people spy.

The former CIA case officer, who recruited others to become traitors and wrote the article says, it comes down to MICES:

– Money: “We give you cash, and you steal secrets.”

– Ideology: The person no longer believes in their system of government or has been abused by the system.

– Conscience: Someone who is looking to atone for the crimes/sins of the system or of themselves.

– Ego: This is a person who responds to stroking of their self-esteem and sense of purpose.

– Sex: A fifth powerful motivator is sex or a relationship that may address people’s feelings of isolation or loneliness.

Thinking about the motivation for spying in terms of Maslow’s Hierarchy of Needs, I have connected the five techniques to turn someone with their basic needs, making the Pyramid of Spying:

– Ideology appeals to someone who has been abused and hates the system and thus is tied to motivations for safety and security.

– Sex/relationships has to do with social needs.

– Spying for reasons of conscience (e.g. what some would consider becoming enlightened) is driven by the need to self-actualize.

The reason that I turned the pyramid/hierarchy upside down for the motivations of why people spy is that being “turned” and becoming a traitor to one’s country is such an unnatural and abhorrent concept to normal people that they would generally not do it just for the money, revenge, or sex (lower-level needs), but rather they ultimately would need to be driven by reasons of conscience and ego (higher-level needs).

Of course, sprinkling in the money, ideology, and sex makes acting the traitor that much more appealing to some–and helps “grease the wheels” to go outside the bounds of what a normal person does and feels towards their nation–but those are not the primary drivers for committing the ultimate crime against one’s country.

Again, normal people are not motivated to be treacherous and treasonous, but given the wrong dose of motivations, people are turned–this means we know how to use the tools of the trade to our nation’s advantage, but also to be mindful and watchful of those who motivations are being acted on.