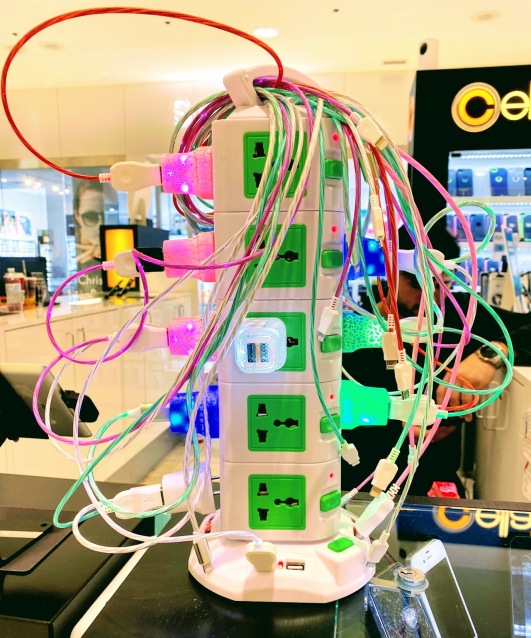 If anything screams wireless…

There has got to be a better way.

One day people are going to laugh their heads off at they way we did technology.

It’s strange how the older you get, the more you come to realize that life is not black and white. However, when it comes to technology, I once held out hope that the way to the future was clear.

Then things started to get all gray again.

First, I read a few a few weeks ago about the trends with wired and wireless technologies. On one hand, phones have been going from wired to wireless (many are even giving up their landlines all together). Yet on the other hand, television has been going the other way—from wireless (antennas) to wired (cable).

Okay, I thought this was an aberration; generally speaking technology advances—maybe with some thrashing about—but altogether in a specific direction that we can get clearly define and get our arms around.

Well, then I read another article—this one in Fast Company, July/August 2009, about the micogrid. Here’s what this is all about:

“The microgrid is simple. Imagine you could go to Home Depot and pick out a wind or solar appliance that’s as easy to install as a washer/dryer. It makes all the electricity your home needs and pays for itself in just a few years. Your home still connects to the existing wires and power plants, but is a two-way connection. You’re just as likely to be uploading power to the grid as downloading from it. You power supply communicates with the rest of the system via a two-way digital smart meter, and you can view your energy use and generation in real time.”

Is this fantasy or reality for our energy markets?

Reality. “From the perspective of both our venture capital group and some senior people within GE Energy, distributed generation is going to happen in a big way.” IBM researchers agree—“IBM’s vision is achieving true distributed energy on a massive scale.”

And indeed we see this beginning to happen in the energy industry with our own eyes as “going green” environmentalism, and alternate energy has become important to all of us.

The result is that in the energy markets, let’s summarize, we are going from centralized power generation to a distributed model. Yet—there is another trend in the works on the information technology side of the house and that is—in cloud computing, where we are moving from distributed applications, platforms, storage, and so forth (in each organization) to a more centralized model where these are provisioned by service providers such as Amazon, Google, Microsoft, and IBM—to name a just a few. So in the energy markets, we will often be pushing energy back to the grid, while in information technology, we will be receiving metered services from the cloud.

The takeaway for me is that progress can be defined in many technological ways at one time. It’s not black or white. It’s not wired or wireless. It’s not distributed or centralized services. Rather, it’s whatever meets the needs of the particular problem at hand. Each must be analyzed on its own merits and solved accordingly.